We are constantly hearing or reading about women who have been violated. It was therefore encouraging to see masses at the Global Summit to End Sexual Violence uniting with the hope and aim of making a real change.

On Tuesday 10th June 2014, London’s Excel exhibition centre opened its doors to the public for free events over two days. Chaired by actress and UN Special Envoy Angelina Jolie and British Foreign Secretary William Hague, many organisations, charities, and speakers shared their knowledge, research, and expertise about sexual violence in conflict while victims bravely put voices to their traumas.

On Wednesday, I was lucky enough to be given a ticket to see Angelina Jolie speak at the viewing of a film she directed entitled ‘In the Land of Blood and Honey’. Within the first twenty minutes of the film, a town had been bombed, men and women had been segregated, and a group of women had been taken into isolation and raped in front of each other. I could barely watch without wanting to physically vomit at the violation as well as the lack of sympathy on the offenders’ part.

If this was not eye-opening enough, on the final day I visited a talk on the risks journalists face when protesting. A speaker explained that in Egypt in 2005, journalists protested against President Mubarak’s son coming into power. The horrific part is the security stood by as groups of men sexually attacked female journalists and protestors.

At the same talk, I was moved to tears and overwhelmed by the bravery, courage and vigour shown by Jineth Bedoya Lima, Deputy Editor of El Tiempo in Columbia, who was a victim of rape. While she was carrying out investigative journalism, she was kidnapped and gang raped. But she did not go into exile or let the attack on her body define or dictate her ability to speak out after the act of domination she experienced through violence.

As a journalist, these stories initially instilled fear within me. But after hearing Jineth speak about the responsibility journalists have in turning women into faces instead of rape statistics, I realised that I am also included in that. In fact, we are all responsible for recognising each victim’s story, each case as an individual one, and each violation as one that must be prevented. 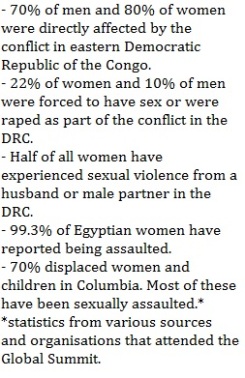 Another talk explained how many men in countries around the world did not know what the word ‘violent’ meant and so beating women was natural; until they were re-educated and they changed their attitudes towards women. According to statistics, where there are high illiteracy rates there are higher rates of sexual violence.

The summit was moving, inspiring and has motivated me more so to try to use my platform as a journalist to make a change to the lives of women around the world. Now is the Time to Act. 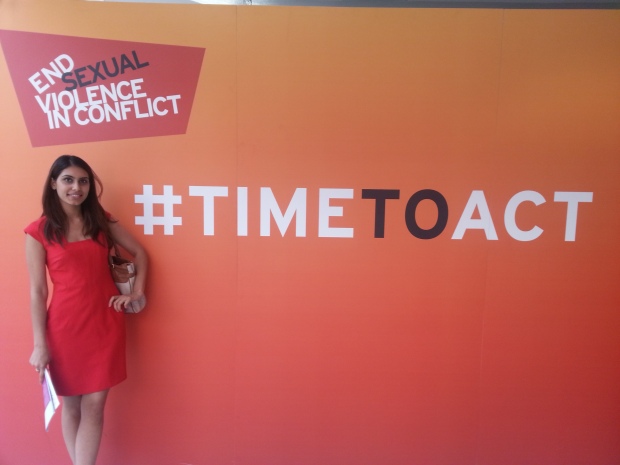