The 2012 Olympic Games are looming. Thousands of jobs have been created and parts of East London have been rapidly developed. But with questionable benefits to London residents and an ever-increasing budget, what do we really know about the Olympics?

I was invited by the BBC to interview some of the key organisers of the Olympics and ask the general public their views about the 2012 games.

I spoke to P 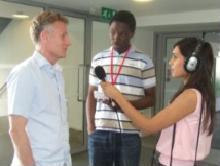 aul Deighton, the Chief Executive of the organising committee for the  2012 Olympics. Ever since we won the bid, he has been part of getting East London ready for the phenomenal games, but realises that there is still so much to do! He spoke about the launch of a volunteer programme, stating that we need 70,000 volunteers to help stage the games and welcome people to London and Great Britain.

I also spoke to some of the young athletes who are training for the Olympics and they were very positive about the impact the Olympic Games will have on other young people as well as the community.

Munira Mirza, who is the Mayor of London’s cultural Olympiad adviser, stressed that the Olympics are not just a one off event, but promise to leave a highly positive, long-term legacy.

And the countdown begins…………